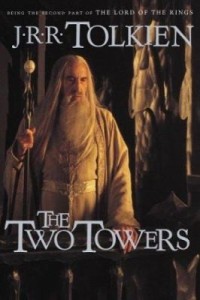 I have a lot fewer quotes than normal from this book. But really, is it not just a filler between the first and third of the series? Just to explain how they got to where they start the third book. I’m not saying it’s not a great book, cause it is, but the third has always been my favorite.

Honestly, I had forgotten how the book was divided up like it was with Sam and Frodo not being mentioned until the second half. Probably due to having seen the movies too many times since I last read the books. It always surprises me, although it shouldn’t, on the emphasis placed by the writer opposed to the movie producer. Where Tolkien glosses over something, the movie makes it a large ordeal. Where Tolkien spends a larger amount of time, the movie glosses over. Yes, I know run time is a huge argument. I wouldn’t be bothered if movies were longer, especially where they have to live up to a book.

There are more facts included in the book that gets lost in the movies. For example,

“This was Orthanc, the citadel of Saruman, the name of which had (by design or chance) a twofold meaning; for in the Elvish speech orthanc signifies Mount Fang, but in the language of the Mark of old the Cunning Mind.”  -J.R.R. Tolkien

Personally, I like the significance of the names and the fact that he’s included it when Gandalf and the others come upon Isengard. Names always hold meaning. Not only had he included a little lesson but it comes solely from two different languages which he invented for this series. Reasons why I will argue with anyone who says J.R.R. Tolkien isn’t a great writer.

That usually shuts them up.

It’s something I don’t think I could ever do. It would take a mind-boggling  amount of time.

“Alive without breath;
as cold as death;
never thirsting, ever drinking;
clad in mail, never clinking.
Drowns on dry land,
thinks an island is a mountain;
thinks a fountain is a puff of air.”
-Smeagol singing

Then lets just casually throw in some riddles. It does go on to say that it is referring to fish but still. The flow is ridiculous. Even with the elvish songs he includes throughout the series.

I saw a post the other day that was a review about the series. The reviewer goes to say how boring and dry a writer that J.R.R. Tolkien is. How no one cares about the “random singing and shit.” How he spends a lot of unnecessary time on things that don’t matter.

I just think that person should go back to watching the movies if they can’t appreciate a masterpiece. As I mentioned before, what he managed to do is incredibly impressive. Yes, there are down moments, but so does every story. I admit some of his works can be dull. Reading the Sillmarillion was a struggle to get through, but the thought put into it? That’s almost unparalleled. Most writers start their story and move forward, not a lot fill in backstories, along with faiths and stories, family trees going back to the very beginning of time for multiple races.

I’m not gonna lie this may be one of my favorite lines from this book and I’m not entirely sure why. It makes me laugh everytime. PO.TA.TOES. along with the image of Sean Austin.

I’m typing up this post and still sitting here giggling to myself about it. Moving on.

And, wrapping it up from some advice from Sam himself:

Honestly, it’s people’s actions that matter not what they say. As pessimistic as it may be, you can’t take someone for their word because nine times out of ten they’re going to hurt you. There are still good and honest people out there but they are so rare. I don’t say things I don’t mean but there are plenty that will say whatever it takes to convince you of things.

I’m not saying you can’t trust people, but what is wrong with making them have to earn it? What’s wrong with reserving your judgment until you can see if their words match their actions?